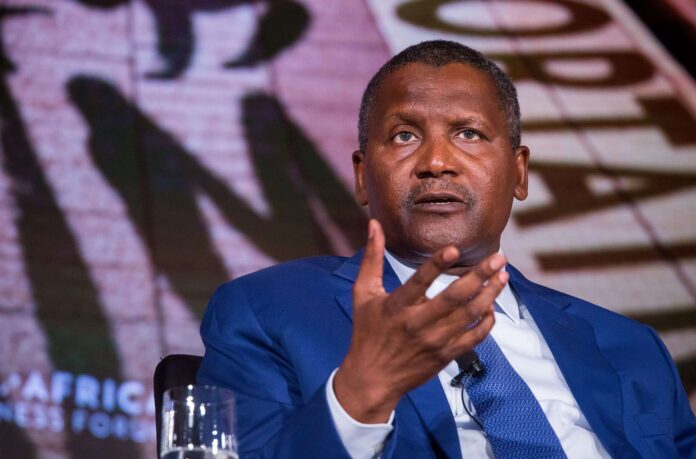 Here is a quick info about Aliko Dangote below.

Aliko Dangote Net Worth in Naira

Aliko Dangote is a Nigerian multibillionaire who was born in Kano State, Nigeria, on April 10, 1957. Mohammed Dangote and Mariyah Sanusi Dantata gave birth to him.

He is well-known for cement manufacturing as his cement company is also called Dangote Cement.

Dangote’s enormous net worth is understandable considering that he runs Africa’s largest cement business, which has given him the upper hand in becoming the richest man in Nigeria and as well Africa.

Fatima Dangote, Halima Dangote, and Mariyah Dangote are the three daughters of Aliko Dangote, who is presently divorced.

Also, there has been a rumor that Aliko Dangote adopted a son at a point in his life but we cannot confirm the extent to which the rumor is true.

Aliko Dangote married two times while in his youth; the first one was to Zainab at the age of 20, whom his parents picked for him to marry. After sometime, they divorced.

Mariya Rufai, the daughter of Bauchi state’s Commissioner for Women Affairs and Human Services, became Aliko Dangote’s second spouse. He divorced for the 2nd time after some time and he has been single since then.

At the age of 21, Aliko Dangote began his path towards being the richest black man in the World.

He borrowed $3,000 from his uncle to import and sell agricultural products in his home nation of Nigeria.

His entrepreneurial idea swiftly became a success, and he was able to pay off the whole debt within 3 months of making progress.

The group began as a trading company in 1981, importing cement, rice, sugar, and other food products for distribution all over Nigeria.

The Dangote group founded by Aliko Dangote always meet the needs of Nigerians with its productions.

Aliko Dangote has received several honors in Nigeria and from other African nations for his contributions in delivering industrial goods, along with certain food items.

Former President Goodluck Jonathan awarded Aliko Dangote as the Grand Commander of the Order of the Niger (GCON).

He was named Forbes Africa Person of the Year in 2014. Also, he has won Forbes’ most powerful man in Africa more than six times.

Time Magazine named him one of the 100 most influential people in the planet.

Also, Bloomberg Markets awarded Aliko Dangote as one of the 50 most influential individuals in the World.

Aliko Dangote was as well the Guardian Man of the Year in 2015 and was awarded the African Business Leader in 2016.

Also read about: The top 10 richest Yoruba men in Nigeria.

After knowing about Aliko Dangote net worth, you shouldn’t be surprised to learn about some of the luxuries he possesses.

He also has a Maybach 57S Knight Luxury worth N364 million, a Bugatti Veyron worth N728 million, a Mercedes-Benz CL65 AMG worth N73 million, and a Bentley Mulsanne worth N112 million, along with many other vehicles.

Aliko Dangote presently own a mansion in Abuja and the mansion is valued $30 million. He also has a luxury yacht worth $43,000 million.

Aliko Muhammad Dangote net worth is capped at $14.7 billion. He is the richest man in Nigeria and also Africa’s richest man.

He is the founder and chairman of Dangote group which involves in the production of cement, industrial goods and food commodities across Africa.

What do you think of this post of Aliko Dangote net worth? Feel free to tell us what you enjoyed about this post.