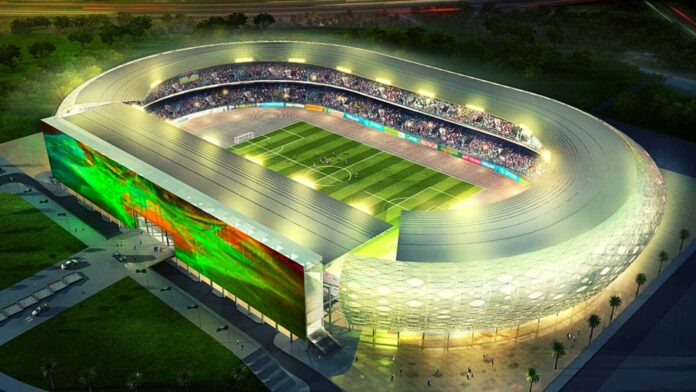 Are you inquisitive to know the top 10 best stadiums in Nigeria? You are in the right place as you are about to find out the best Nigerian Stadiums in 2022.

When it comes to sports, particularly football; stadiums and venues are very important. In Nigeria, football is the most loved and the most watched sport.

Despite Nigerians love for international sports, there are still a lot of local sport lovers who occupy Nigerian stadiums and venues to watch their local team football matches and other sport games.

Over the years, the Nigerian governments have been building FIFA standard stadiums which would likewise aid the comfort and safety of their spectators.

Many states in Nigeria already boast about their stadiums having the best facilities, equipment, pitch, designs, health care and many more.  As a result, it has sparked the argument on which the best stadiums in Nigeria are.

Therefore with attempts to settle this, we have compiled a list of the top 10 best Stadiums in Nigeria which you would find below.

The Top 10 Best stadiums in Nigeria are detailed in an ascending order below.

Julius Berger was given the contract to build the Akwa Ibom International Stadium project in 2012, and it was finalized in 2014.

The innovative, multipurpose sports complex has a seat capacity of 30,000 and it was modeled after Allianz Arena, an iconic stadium in Germany.

The Federal Capital Territory of Nigeria, Abuja is home to Moshood Abiola National Stadium, a multi-use venue for national and international sporting events.

The construction of the stadium began in 2000 and was officially completed, and opened in 2003 to host the 8th All Africa Games. Since its opening, it has been one of the best stadiums in Nigeria.

In addition to being the home of the Nigerian national football team, the stadium is frequently used as a venue for a wide variety of social, cultural, and religious gatherings.

It was originally launched as “The National Stadium, Abuja” but was eventually renamed in 2019 as Moshood Abiola National Stadium in honor of Late Moshood Kashimawo Abiola, who was regarded as the pillar of sports in Nigeria.

Moshood Abiola National Stadium has a seat capacity of 60,491 and it is without doubt the largest stadium in Nigeria currently.

The stadium was built at a cost of $360 million by the federal government, and it has all of the necessary accessories.

Moshood Abiola National Stadium is not only among the best Nigerian stadiums but also one of the top FIFA standard stadiums in Nigeria.

The Stadium is primarily used for football matches and is the home field of First Bank FC. Additionally, the Nigerian national rugby league team also utilizes the stadium.

The stadium can hold 24,325 spectators and it is occasionally used for international football fixtures.

It hosted some matches of the 2009 FIFA U-17 World Cup youth tournament held in Nigeria, and it previously hosted the Nigerian FA Cup final. Later in 2012, the Teslim Balogun stadium hosted the 18th National Sports Festival.

The total construction cost of Teslim Balogun stadium is 1.3 billion naira, and it took over 23 years to get to its final completion. Since its completion, it has been one of the best Nigerian stadiums.

The Nnamdi Azikiwe Stadium located in Enugu, Nigeria, is a stadium that is used for variety of events. It is one of the largest stadiums in Nigeria and has a capacity of 20,000 seats.

At the moment, football matches make up the majority of the activities that take place there, and Enugu Rangers consider it their home stadium.

The Nnamdi Azikwe Stadium was named after Nnamdi Benjamin Azikiwe, who was the first president of the Republic of Nigeria.

This stadium was opened in 1959 and was formerly owned by Nigeria Railway Corporation, but Enugu Rangers brought it to its height of popularity in the 1970s and 1980s.

The U. J. Esuene Stadium is a large soccer stadium located in Calabar, Cross River Nigeria. It is also used for a wide range of public events and activities as it has a seat and spectator capacity of 16,000.

It was officially launched on April 2, 1977 with a match between Benin’s Bendel Insurance F.C. and Calabar Rovers of Calabar, both of whom were newly created at that time.

In October of 2003, competitions at the 2003 All-Africa Games were held at U. J. Esuene Stadium. Additionally, it was one of the stadiums under consideration for the 2009 FIFA U-17 World Cup.

To modernize and improve the quality of the stadium, some facilities including ultra-modern electronic video-matrix scoreboards and stunning floodlights have been provided.

U.J. Esuene Stadium is not only among best Nigerian stadiums but also one of the largest stadiums in Nigeria.

It is the home stadium of Rivers United F.C., formerly Dolphins F.C., and is mostly used for football matches.

Yakubu Gowon stadium was renovated in 1998 and was later expanded in 2001.

In 2015, its name was changed from Liberation stadium to Yakubu Gowon stadium in honor of General Yakubu Gowon who was a former military head of state in Nigeria.

The stadium is a large arena for a variety of sporting events, with a seating capacity of 16,000 people and it is among the best stadiums in Nigeria.

The Enyimba International Stadium ranks as the 7th best stadium in Nigeria. It is a multi-purpose stadium located in Aba, Abia State, Nigeria.

It is the home ground of Enyimba F.C. and is mostly used for football matches.

The Enyimba Football Club of Aba won the CAF Champions League twice in a succession, making it one of Nigeria’s most well-known venues.

This stadium was originally titled the Aba township stadium when it was first constructed in 1992, but it was renamed in 2002 in commemoration of Enyimba Football Club’s CAF Champions League victory in 2003.

The capacity of the stadium was quite low many years back, however the 2018 upgrades to Enyimba International Stadium increased the stadium’s seating capacity to 16,000 spectators.

Sani Abacha Stadium is one of Nigeria’s largest stadiums, with a capacity of 16,000 spectators.

It is primarily utilized for football and sporting events. Kano Pillars F.C. plays their home games at the stadium, making it their home stadium.

Sani Abacha Stadium is a multifunctional stadium which is located in the city of Kano, Kano State, Nigeria.

The stadium was given its name in honor of Late General Sani Abacha, who was a former military dictator in Nigeria.

Sani Abacha Stadium has been the venue for a number of prestigious international competitions, including the African Cup of Nations in 2000 and the FIFA U-17 World Cup in 2009.

The stadium first opened its doors in 1998, and as of now, it is considered to be the 8th best football stadium in Nigeria.

The Samuel Ogbemudia Stadium is another one of best stadiums in NIgeria for sporting events.

It was once known as the Ogbe Stadium and can be found in Benin City, which is located in Edo State, Nigeria.

At the moment, its primary purpose is to host football matches, and it serves as the primary venue for both Bendel Insurance FC and Edo Queens FC.

The stadium can accommodate up to 12,000 people and is designed to be used for a variety of events.

Stephen Keshi Stadium is a large multipurpose sports venue which could be found in Asaba, Delta State, Nigeria.

Stephen Keshi Stadium was commissioned in 2018 and was originally known as the Asaba Township Stadium. But was given its current name in honor of Late Stephen Keshi, a former coach for the Super Eagles who guided the team to victory in the 2013 African Cup of Nations competition.

The stadium has a capacity of 22,000 people and offers covered seating for all of them. In 2018, it played host to the African Championships in Athletics.

Today, the Stephen Keshi Stadium remains one of the largest and top stadiums in Nigeria.

SEE: The List of the Top Richest States in Nigeria.

We have provided above a list of the top 10 best stadiums in Nigeria 2022.

Most of these stadiums are well equipped with adequate facilities and modern features to standardize the sports experience of the spectators and likewise the Athletes.

Kindly tell us what you think of this article on the list of the best stadiums in Nigeria.