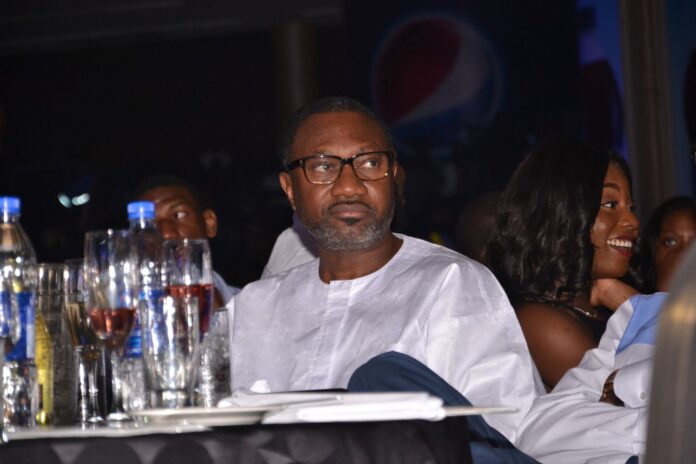 It should come to your knowledge that Femi Otedola is one of the richest people in Nigeria.

Femi Otedola Net Worth in Naira

The enormous net worth of Femi Otedola can be due to the several enterprises he manages.

Femi Otedola was once the chairman of Forte Oil Plc, a petroleum company which he founded until he sold it out in 2019.

He was once the chairman of Forte Oil Plc, a petroleum company where he had the highest shares until he sold it out in 2019. Zenon Petroleum and Gas Ltd, which he founded, is also a big source of income to him.

He owns quite a number of additional enterprises in a variety of industries, including property investment, shipments, and financial services.

Femi Otedola is a well-known Nigerian entrepreneur, investor, CEO, and businessman in every sense of the word.

He was born on November 4, 1962, in Ibadan, Oyo State, Nigeria to Michael Otedola’s family.

From 1992 to 1993, Femi Otedola’s father, Sir Michael Otedola was the Executive Governor of Lagos State, Nigeria.

After General Sani Abacha became the military head of state, his father resigned due to some certain reasons.

Femi Otedola had already begun to implement business strategies that would impact his life by the time he was six years old.  In that same year, he began his first company.

Dj Cuppy and Tolani in the music industry are among his three daughters who are successful in Nigeria’s entertainment sector. Temi Otedola, a fashion blogger is also a successful blogger in her fashion industry.

Zenon Petroleum and Gas is a company that sells and distributes gasoline and oil products.

He made a huge effort in investing 15 billion naira in his Zenon Company. The investment was used in attaining cargo ships, storage storage facilities as well as infrastructure sector.

Femi Otedola purchased a 28.7% stake in African Petroleum Limited, now known as Forte Oil Ltd. In time, he was named CEO and Chairman of Forte Oil Petroleum Ltd as a result of Zenon’s interests in the company before he got his shares sold.

He received an extra 29.3 percent share in Forte oil Petroleum Limited, bringing his total shareholding to 56 percent, making him the company’s largest shareholder.

In 2019, Femi Otedola sold his shares in Forte Petroleum Oil Ltd and was no longer Forte Oil Ltd chairman. Meanwhile his intention was to focus on Geregu Power Plc, a power company he founded.

Femi Otedola is a well-known philanthropist and was once the second Nigerian after Aliko Dangote to be listed on Forbes’ billionaire list due to his enormous net worth but his net worth reduced over the years.

He has donated to a variety of charities. Femi Otedola gave a $14 million donation to a charity organization called “Save The Children Fund” which he was highly recognized and appreciated for.

He became a South Africa Commercial Relationship Development Committee Member in 2004 and the Nigerian National Economic Management Team member in 2011.

Femi Otedola was also the Non-executive Director of Transnational Corporation of Nig. PLC from 2006 to2011.

In 2007, he became the Chairman of Transcorp Hilton Hotel, popularly known as 7 star hostel in Abuja, Nigeria.

Femi Otedola is a billionaire who owns at least three properties in Lagos. Another location is Abuja, where he arranges several meetings with his fellow business moguls and his officials.

Another location is Abuja, where he arranges several meetings with his fellow business moguls and his officials.

Femi Otedola property are believed to be found all across Nigeria. He also has a personal jet valued over $60 million.

Femi Otedola has a fleet of high-end vehicles and in Nigeria, he has a Mercedes fleet. He also has the Rolls-Royce custom-designed automobiles, which were manufactured in the U.K.

These fleets cost around a billion dollars. His Mercedes-Benz AMG 63 is bulletproof, and he purchased a Mercedes-Benz McLaren SLR worth N250 million not quite long ago.

Here are some collections of his expensive automobiles and some other luxuries.

As you’ve seen above, Femi Otedola Net worth is valued around 1.83 billion dollars.

Femi Otedola has been planning out his businesses since the age of 6 and he eventually started his first mini business at that same age of 6.

As years passed, he has developed all these business ideas and insights greatly; enabling him to be one of the richest men in Nigeria and Africa today.

Also, Kindly check out the list of the top 10 richest men in South Africa.