Jeff Bezos is an American billionaire and widely regarded as the world’s 2nd richest man after Elon Musk.

How much is Jeff Bezos Net Worth?

Jeffrey Bezos has acquired the majority of his wealth through Amazon, an e-commerce company which he started in his Garage in 1994. According to Caknowledge, Amazon net worth was reported to be $1.57 trillion as at 2022. 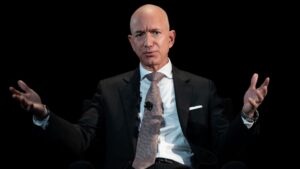 Jeffrey Preston Bezos is the CEO and founder of Amazon, a company widely known as one of the most valuable companies in the world. Jeff Bezos also own some other popular companies which include; Blue Origin, and The Washington Post.

He was born on January 12, 1964 in Albuquerque, New Mexico, to Jacklyn (née Gise) and Theodore Jorgensen.

His mother was a 17-year-old high school student at the time of Jeffrey’s birth, and his father was 19 years old.

In April 1968, after his parents’ divorce, his mother wed Miguel Mike Bezos. Due to Mike’s marriage to Jeff’s mother, Mike Bezos adopted Jeffrey, who was four years old at the time, and legally changed his surname from Jorgensen to Bezos.

Jeff also attended Miami Palmetto High School after his family relocated to Miami, Florida, for his high school. During his senior year of high school, Bezos worked as a short-order line cook during the breakfast shift at McDonald’s.

At the University of Florida, Jeff participated in the Student Science Training Program. In 1982, he was the valedictorian of his high school, a National Merit Scholar, and the recipient of the Silver Knight Award.

Jeff Bezos’s first major employment was at Fitel, a finance telecoms startup, where he was tasked with constructing an international commerce network.

He was subsequently promoted as the head of development and then as director of customer service. Jeff Bezos decided in 1993 to launch an online bookstore.

On July 5, 1994, he and his then-wife, MacKenzie, quit their positions at D. E. Shaw and launched Amazon in a rented garage in Bellevue.

Bezos originally named his new firm Cadabra, but then changed it to Amazon, after the Amazon River in South America, and also because Amazon begins with the letter A, which is the first letter of the alphabet.

Then he invested the estimated $300,000 he received from his parents in Amazon.

Bezos started Blue Origin, a human spaceflight firm, in September 2000, as he has long demonstrated an interest in space flight and the expansion of human life within the Solar System.

In 2013, Bezos signed a $600 million deal for Amazon Web Services with the Central Intelligence Agency (CIA). Amazon was acknowledged as the largest online retailer in the world in October of that year.

Don Graham suggested that Bezos purchase The Washington Post for $250 million in cash on August 5, 2013, and Bezos did so.

In 2016, Bezos sold significantly more than one million shares of his Amazon stock for $671 million, followed by the sale of another million shares for $756.7 million.

Jeff later announced in early 2021 that he would step down as CEO of Amazon in the third quarter of 2021 and become Executive Chairman of the Amazon Board.

So far, Jeff Bezos, the world’s second richest man is one of the most successful entrepreneurs in world. As at 2022, Jeff Bezos net worth has been estimated to be $150.

Check out: The Richest States in USA

As already stated, Jeff Bezos net worth is currently valued at $150 billion, and he is the second richest man on earth as at 2022.

Jeff Bezos started his Amazon’s e-commerce company in his garage because he had interest in creating an online book store.

Today, his Amazon Company is one of the largest e-commerce companies in the world. Jeff BEZOS also has other popular companies which are BLUE ORIGIN and THE WASHINGTON POST.

What do you think of this article on Jeff Bezos net worth and Biography? Kindly let us know.