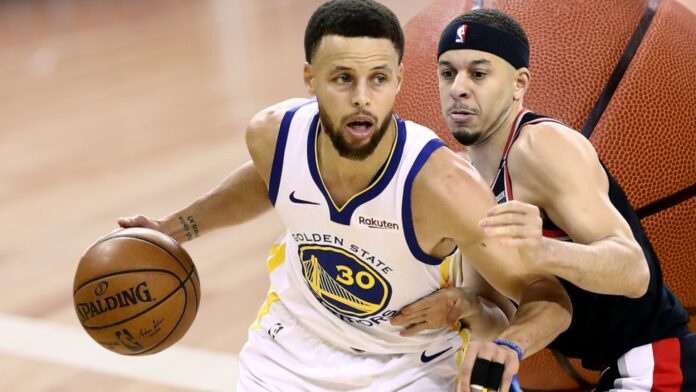 What is Stephen Curry’s Net Worth and Salary in 2022?

Steph is an eight-time NBA All-Star who has won three NBA titles and has twice been awarded NBA Most Valuable Player.

Curry is already widely regarded as the NBA greatest shooter of all time. In the Golden State Warriors, he wears the number 30 jersey and plays the position of a point guard.

Related: The Richest States in USA.

How much is Stephen Curry’s Net Worth?

Stephen Curry’s Net Worth is reported to be at $160 million, making him one of the richest NBA players.

Steph Curry, who earns $79.8 million from basketball, is also one of the highest-paid athletes in the world. He is in fact, the second highest paid NBA player, after LeBron James, a legendary basketball player in the Los Angeles Lakers team.

Curry signed a five-year, $201 million agreement with the Warriors on July 1, 2017, making him the first NBA player to sign a contract worth more than $200 million. 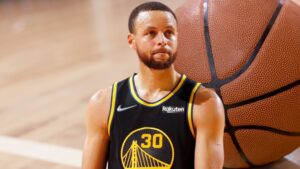 Stephen Curry is an American basketball player whose full name is Wardell Stephen Curry. Steph Curry was born in Akron, Ohio, on March 14, 1988.

He is married to Ayesha Curry, a Canadian-American actress, entrepreneur, and cooking T.V personality.

Sonya Curry is Stephen Curry’s mother, and Dell Curry, who was a member of the Cleveland Cavaliers, is his father.

He grew raised in Charlotte, North Carolina, where his father played for the Charlotte Hornets for the most of his NBA career.

Steph and his younger brother Seth were frequently taken to Dell Curry’s games, where they would shoot with the Hornets during warm-ups.

The Curry family briefly relocated to Toronto, where Steph’s dad ended his NBA career with the Raptors.

At that time, Steph Curry was a member of the Queensway Christian College boys’ basketball team, and he helped them achieve an undefeated season.

He was also a player of Toronto 5–0, an Ontario-based club, where he led the squad to a 33–4 record and the provincial championship.

Later, the family relocated back to Charlotte and Stephen Curry enrolled in Charlotte Christian School, where he led his team to win three conference titles and three state tournament appearances.

At a Davidson alumni event, head coach Bob McKillop commended Steven Curry before his first game for the Wildcats, saying: “Take a look at Steph Curry. He’s a special individual.”

Steph scored 15 points in his debut college game against Eastern Michigan, but he also had 13 turnovers. He also scored 32 points, threw out four assists, and grabbed nine rebounds in the following game against Michigan.

Wardell Curry concluded the season as the scoring leader in the Southern Conference, averaging 21.5 points per game.

He was voted Southern Conference Freshman of the Year, SoCon Tournament MVP, and SoCon All-tournament team, All-freshman team, and first-team All-SoCon at the completion of his freshman season.

Steph however finished second in scoring among freshman in the whole country, after Kevin Durant of Texas.

After completing the season, he was picked for the 2007 FIBA U19 World Championships, where he averaged 9.4 points, 3.8 rebounds, and 2.2 assists in 19.4 minutes, propelling Team USA to a silver medal result.

Early in the second half; facing Gonzaga in 2008, Gonzaga led by 11 points, but Curry scored 30 points in the half to help Davidson win its first NCAA Tournament game since 1969, 82–76.

Wardell Steph Curry scored 40 points and shot 8-of-10 from three-point range to finish the game.

In the NCAA Regional Finals, Davidson was eventually defeated by Kansas.

He was however voted the Most Outstanding Player of the Midwest Region of the NCAA Tournament in 2008; and was the first player from a team that did not advance to the Final Four since Michigan’s Juwan Howard in 1994.

Steph indicated that he aspired to become a point guard in the NBA, which is his most likely position; Curry then decided to return for his junior year and to develop himself.

Curry was taken seventh overall in the 2009 NBA draft by the Golden State Warriors on June 25, 2009.

His performance in the second half of the season propelled him into contention for rookie of the year.

During a game against the Portland Trail Blazers on April 9, he set a new league record most three-pointers made in a season. Curry was named NBA Most Valuable Player after averaging 23.8 points, 7.7 assists, and 2 steals per game for the Warriors, who concluded the season with a 67-win record.

He scored 37 points in Game 5 of the 2015 NBA Finals, and Golden State won the series in Game 6 to capture their first championship in 40 years. He averaged 26 points and 6.3 assists per game in the Finals.

Curry’s sixth career triple-double came on December 28, when he had 23 points, a career-high 14 rebounds, and 10 assists in a 122–103 win over the Sacramento Kings.

He hit 8 three-pointers in the game to reach 200 for the season, making him the first player in NBA history to hit 200 in four consecutive seasons.

Steph Curry enjoyed the best season of his career in 2015, starting the season on a 24-0 winning streak.

The Golden State Warriors concluded the season with only 9 losses, setting a new league record for the best regular-season performance by a club.

Steph Curry MVP for the 2nd time in a row– In 2016, Steph Curry was awarded the NBA’s first-ever unanimous MVP, and he became the 11th player in NBA history to win the award in consecutive seasons, and the first guard to do so since Steve Nash.

Curry got his first career postseason triple-double in Game 2 of the 2017 NBA Finals against the Cleveland Cavaliers, scoring 32 points, 11 assists, and 10 rebounds to help the Warriors go up 2–0 in the series with a 132–113 victory.

Steph topped all scorers with 37 points in Game 4 of the 2018 NBA Finals, helping the Warriors capture their second consecutive title with a series sweep against the Cavaliers.

Curry, like every other major athlete in his heyday, has reaped the benefits of his reputation with a slew of endorsements and tie-ins with large corporations.

With many rumors in town; the 32-year-old NBA star makes more money through endorsements than he does from his regular salary in the NBA.

According to Hoops Hype, his salary is expected to rise in the following years, reaching over $60 million in the 2025-26 season.

However, Steph Curry’s net worth in 2022 has been estimated to be 160 million dollars.

Steph Curry is one the best NBA basketball players and he has achieved a lot in his career.

So far, Stephen Curry has 3 NBA Rings; as he has won NBA Championships 3 times for the Golden State Warriors Franchise.

Curry has also won 2 consecutive NBA MVPs, making him one of few NBA players to win an MVP two times in a row.

Steph Curry’s net worth is valued at 160 million dollars in 2022; and he is one of the richest NBA Players.

Also read on the: Top 10 Tallest Buildings in the World.