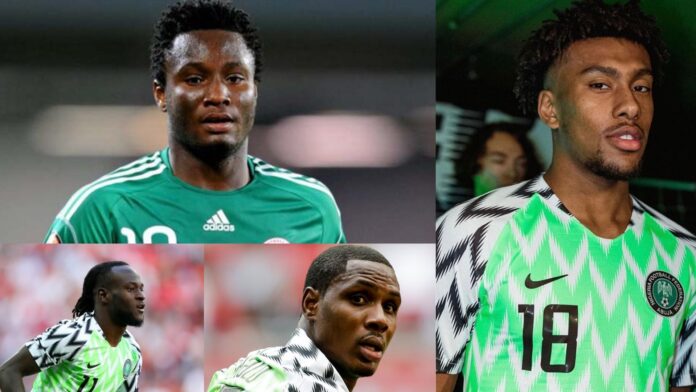 In case you didn’t know, football is the most popular sport in the world and likewise one of the highest paid sports in the world.

Without doubt, it is expected to be a source of great income for footballers. Nigeria as a country has had several of its football stars shining both nationally and internationally over the years.

Some of these outstanding Nigerian footballers have been seen playing in the popular English Premier League, likewise found in the Chinese football clubs.

A lot of questions are being asked all around the world like who is the richest footballer in Nigeria? Or who are the richest Nigerian footballers? And because of that, we have made available reliable answers to these questions.

Right away, let us check out the list of the top 10 richest footballers in Nigeria 2022 and their net worth.

Just in: The 10 Richest People in Nigeria.

The Top 10 Richest Footballers in Nigeria 2022 Are:

The detailed list of the Richest Nigerian Footballers can be seen below in a descending order.

Kelechi Promise Iheanacho is a Nigerian footballer who plays as a forward for Leicester City in the Premier League as well as for the Nigerian national football team.

He was born in Obogwe, Imo State, Nigeria, on October 3, 1996. Kelechi Iheanacho is one of the richest footballers in Nigeria 2022 as he is reported to worth $4 Million.

Iheanacho started his professional career at the Taye Academy in Owerri, Imo State. His big break came in 2013, when he was a member of the Nigerian national team in the U-17 FIFA World Cup, where they won.

On January 10, 2014, Iheanacho joined Manchester City’s Academy and began his international career. During City’s first match  tour, he scored in a 4-1 victory over Sporting Kansas City.

On 3 August 2017, he signed a five-year deal with Premier League club Leicester City for a rumored price of £25 million. He made his first appearance for the club on August 11, 2017, in a 4–3 loss to Arsenal, however he scored his first goal for the English club on October 24, 2017, against Leeds United.

Kelechi Iheanacho was a member of the Nigerian U17 national team. The amazing 2013 African U-17 Championship in Morocco was his major international competition.

Iheanacho made his senior team debut against Egypt in an African Cup of Nations qualification match on March 25, 2016.

Alex Iwobi is a Nigerian national footballer who used to play for Arsenal in the Premier League before moving to Everton.

He was born on May 3, 1996 in Lagos, Nigeria, but moved to England when he was four years old and joined Arsenal when he was eight years old.

Iwobi had the distinction of representing England’s youth squad in international football at the under 16, 17, and 18 levels as a teenager.

Alex Iwobi made his Premier League debut in a victory against Swansea City after making his League Cup debut for Arsenal in the Round of 16.

Iwobi left Arsenal eventually and signed a five-year contract with Everton on August 8, 2019.

Iwobi made his national debut for Nigeria’s senior football side in a friendly match against DR Congo.

He was also a member of Nigeria’s 35-man roster for the 2016 Summer Olympics, however he had to withdraw before the final squad was released due to injury.

He was a major player in the 2018 world cup and he scored a goal against Zambia to aid his country, Nigeria qualify for the 2018 FIFA World Cup.

Alex Iwobi is a famous Nigerian footballer and he is rated among the richest footballers in Nigeria, having a net worth estimated to be $5 Million.

Victor Chinedu Anichebe is also among the richest footballers in Nigeria with a net worth estimated to be $11 Million. He was born on April 23, 1988 in Lagos State, Nigeria, but subsequently migrated to Liverpool, England.

He is a Nigerian professional footballer who plays as a striker for Beijing Enterprises, in Chinese league.

Anichebe made his backup debut for Everton at the age of 15 and his first-team debut less than two years later, on 27 February 2006, as a substitute in Everton’s FA Cup fourth round fixture against Chelsea, replacing Simon Davies.

In April 2006, he signed his first professional contract, a two-year agreement with Everton. Anichebe made his debut for Nigeria on March 26, 2008, in an Olympic Games qualification match against South Africa, when he came off the bench to score the game-winning goal in a 3–0 victory for Nigeria.

Anichebe moved to West Bromwich Albion in a deal worth up to £6 million. He signed a one-year deal with Sunderland in 2016, although he later joined the Chinese club Beijing Enterprises Group after Sunderland released him.

Emmanuel Chinenye Emenike is a Nigerian professional footballer who began his career with Delta Force F.C. in 2007.

In 2008, he transferred to Black Aces. He made seven appearances for Black Aces in South Africa and scored three goals before heading to Cape Town for the 2008/2009 season.

He was on the reserve squad in Cape Town, thus he occasionally came on as a replacement. Emmanuel Emenike participated in sixteen matches and scored one goal for Capetown during the 2008/2009 season.

In 2009, he agreed to a one-year loan with Karabükspor. He later joined Fenerbahçe for an unknown amount in 2011 and was eventually transferred to Spartak Moscow for €10 million the same year.

Emenike played in the 2013 AFCON and scored four goals throughout the tournament. However, due to a thigh injury, he was unable to compete in the finals.

He returned to Fenerbahçe in August 2013 for a cost of roughly €13 million, but was loaned to Al Ain for six months in 2015.

Emenike signed a two-year contract with Greek champions Olympiacos for a price of €3.8 million on July 6, 2017.

With his love and hard work for football, Emmanuel Emenike has become one of Nigeria’s richest footballers.

Ahmed Musa was born in Jos, Plateau State, Nigeria on October 14, 1992, to a Christian mother from Edo state and a Muslim father from Borno state.

Musa began his career with GBS Football Club in Jos before transferring on loan to JUTH FC in the Nigerian National League in 2008.

Ahmed Musa advanced his career further when he transferred to the highest tier of the Nigerian League, NPFL, on loan in 2009 with Kano Pillars, where he established the record for the most goals (18) in a single NPFL season, which was later surpassed in 2011.

Ahmed Musa was later called up to the senior team, but was unable to compete in the 2010 FIFA World Cup due to injury.

He also assisted Nigeria in winning the 2011 African Youth Championship, where he was named most valuable player, and the 2011 FIFA U-20 World Cup, when he was nominated for the tournament’s Golden Ball.

Musa has formerly played for VVV-Venlo, CSKA Moscow, and Leicester City. He returned to Nigerian club, Kano Pillars after the end of the season in 2021.

His net worth in 2022 has been estimated to be $18 Million, making him to appear among the richest Nigerian footballers.

Victor Moses has an estimated net worth of $23 Million and he is without doubt among the richest footballers in Nigeria.

He began his professional football career at the age of 16 with Crystal Palace, where he scored his first senior-level goal against West Bromwich Albion.

Moses completed a $ 2.5 million deal to join Wigan Athletic in the Premier League, where he was a regular starter.

He was signed by Chelsea and made his debut as a substitute against Queens Park Rangers. He was then loaned to Liverpool and Stoke City for two seasons in a row before returning to Chelsea and renewing his contract.

Victor Moses left Chelsea in 2021 to join Spartak Moscow, where he currently plays as a winger.

Another of the richest footballers in Nigeria is Vincent Enyeama. He was born on August 8, 1982, in Kaduna, Nigeria’s northernmost state.

His football career began in 1999, when he became a member of a football team called Ibom Stars.

Vincent made his Nigerian national team debut against Kenya in May 2002. Since then, he has played for Nigeria for almost fifteen years.

During this time, he participated in three FIFA World Cup competitions which occurred in 2002, 2010, and 2014, as well as multiple African Cup of Nations tournaments, including the 2013 edition, which he captained and helped clinch victory.

Vincent Enyeama opted to go international after three seasons with Enyimba International FC and a season with Heartland FC. He relocated to Israel in 2005 and joined Bnei Yehuda Tel Aviv.

In 2011, he joined a football club called Lille Olympique Sporting Club and he left in 2018.

Obafemi Akinwunmi Martins is the third richest Nigerian footballer on this list of the Richest Footballers in Nigeria.

He is a Nigerian professional footballer who plays for the Chinese club Shanghai Greenland Shenhua.

Obagoal “the king of goal” was his nickname because of his quickness on the ball and lethal efficiency in scoring a goal.

Newcastle United, Inter Milan, Sounders FC, and Seattle Sounders FC are just a few of the numerous notable clubs for which he has represented.

Obafemi Martins’ net worth is currently $35 Million, making him one of the richest footballers in Nigeria 2022.

Odion Ighalo is a Nigerian professional footballer most known for his time as a striker for English club Manchester United while on loan from Chinese team Shanghai Greenland Shenhua.

Ighalo is one of the top ten richest footballers in Nigeria and he has an estimated net worth of $43 million. Odion Jude Ighalo was born in Lagos on June 16, 1989, and nurtured in Edo, Nigeria. However, he spent the majority of his childhood in Ajegunle, Lagos.

Ighalo began his football career with Nigerian clubs such as Prime from 2000 to 2005 and Julius Berger in 2006. In 2007, he joined the Norwegian club Lyn.

Later, he began his professional career and was recruited by Udinese, where he spent the majority of his time, notably on loan at Granada.

He also joined Watford in the EFL Championship in 2014 and was instrumental in the club’s promotion to the Premier League in the 2014/2015 season.

Ighalo joined the Chinese Super League team Changchun Yatai in January 2017 for a rumoured £20 million before going on to Shanghai Greenland Shenhua.

Odion represented his country, Nigeria in the 2018 World Cup and scored the most goals in the 2019 Africa Cup of Nations qualification campaign. In 2021, he was reported to have joined a Saudi club where he plays as a striker for Al Hilal.

John Michael Nchekwube Obinna was born on April 22, 1987 and nurtured in the Nigerian city of Jos, Plateau State. He is an Igbo from Anambra State in eastern Nigeria.

During the 2003 FIFA U-17 World Cup campaign in Finland, he was given the name Mikel by mistake by the Nigerian Football Association (NFA), who had submitted it instead of the original Michael.

Mikel Obi is a name that is always on the lips of Nigerian sports fans. He is one of Nigeria’s top players and is likewise playing for Tianjin TEDA, a Chinese Super League team.

Mikel is a former Chelsea football club player who made his debut for the club on September 12, 2006, against Levski Sofia in a UEFA Champions League match.

In 2013, he was captain of the Nigerian national squad that competed in the African Nations Cup and played alongside Nigeria to victory.

The Top 10 Richest Footballers in Nigeria 2022 by Forbes are;